The EPA was a full partner in European-level project called mPIVAS (mHealth psychoeducational intervention versus antipsychotic-induced side effects), initiated by the EPA Early Career Psychiatrists Committee (ECPC) and funded under the Lifelong Learning Programme of the European Union.

A word from Dr. Martina Rojnic Kuzman, project coordinator, on the success of mPIVAS, an EU-funded project for mHealth Psychoeducational Intervention Versus Antipsychotic-Induced Side Effects:

The EPA and its partners have successfully finished the mPIVAS project with a number of significant outcomes: 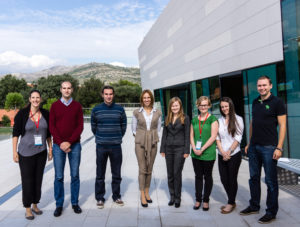 There were 6 full partners from 5 countries in the project:

7 silent partners were also involved in the project.

The project aimed at improving the monitoring of side effects of antipsychotic medication in clinical practice. For this purpose, innovative psychoeducational courses on the subject were organised for mental health professionals during EPA Munich 2014 as well as in project countries, and a mobile application (PsyLOG) facilitating the monitoring of side effects was produced. You can find the programme of the psychoeducational course that was held during the EPA Munich 2014 here, and the webcast of the course in the following section.

Part 1: Strategies to prevent side effects from antipsychotic treatment

Antipsychotics in the treatment of schizophrenia: efficacy and side effects (by I. Bitter)

Side effects of antipsychotics: prevention and treatment strategies (by A. Mitchell)

Part 2: eHealth in the prevention and treatment of psychotic disorders

M-health in psychiatry: A new horizon in mental health care (by F. Spaniel)

More information on the project can be found on the official project website and the dedicated Facebook page.